I took a break from making Scrappy Trips to make a block for my 2013 Combined BOM Quilt as I love the fabrics I am using for that so much.  I chose to make the one from Aurifil called A Heavy Cross.  I debated with myself for quite some time as to whether or not I would make this one.  It has a lot of small pieces in it, lots of triangles, and the example square shown is in very busy fabrics .  I couldn't see the design of the square through the fussiness of the print and it was difficult to pick out which parts I wanted to highlight.  You can see the pattern here. In the end I decided to just  go for it.

I started by giving my fabrics a really good starching so that it wouldn't stretch too much on all those bias cuts. The cutting out was a bit of a nightmare.  With so many small pieces to join together it was obvious that precise cutting was manditory as  there would be no room for fudging.  Some of the pieces are measured in 16th of an inch. My quilting rulers only measures in 8ths and so I had to hunt for an old school ruler to measure that one. To get a good point on the rectangle I cut it a bit larger and then trimmed it to size after cutting the triangle wedge off.  I labelled each set of pieces so I wouldn't get muddled up.  Here's all 61 pieces cut, labelled and ready for sewing. 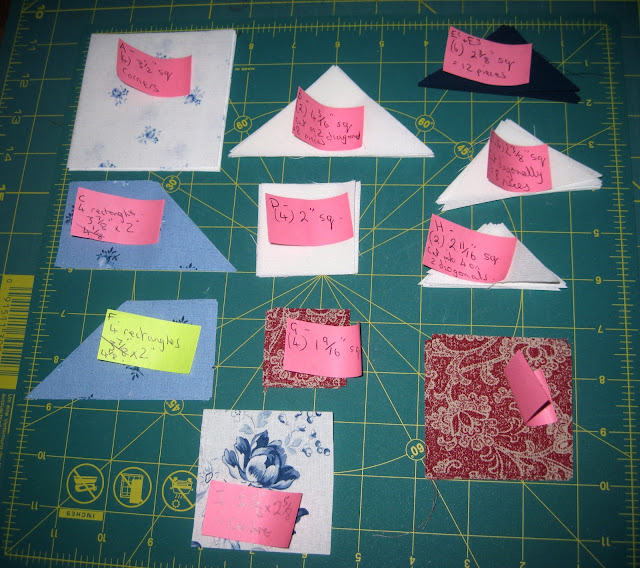 I followed the plan for the piecing, making sure that my seams were a scant 1/4 inch.  For the first time ever I didn't press each seam as I sewed it but just finger pressed each seam open as I didn't want to distort the fabric in any way.  With all the starch I used this worked really well.  I finger pressed open seams because I wanted to get those joins as flat as possible.  In some places there are six different pieces in one intersection.
I also shortened my stitch length to 1.5 so that the pieces didn't pull apart at the ends, which was fine until I needed to use the seam ripper to unpick a few times when points didn't match up properly.  This block took me about four times as long as it usually does to make a 12 1/2 inch block, but I am reasonably pleased with the accuracy of it.  I pressed right at the end and had the minutest bit to trim off when I squared it up. 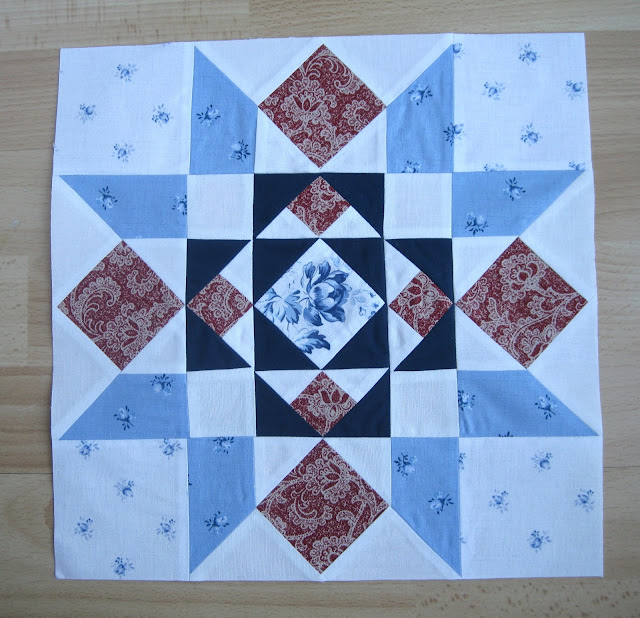 It was a very challenging block to make, I like the pattern design, but I won't be making another!
Posted by joanold at 21:30