My round up of finished items for the month of September is really easy.  Absolutely nothing!  I haven't machined a single stitch, but I have been busy.  My sewing room was getting crowded out with bags full of donated scraps.  My sister and several of my friends have given me bags full of unwanted fabric and scraps.  They were taking up a lot of space and I really needed to see what was suitable and usable for patchwork, and what I could pass on for other usage.  I started on the 1st September, and finally finished yesterday!  Yes, it took me a whole month!

First, I emptied each bag and sorted out all the cottons.  I had to do the burn test on some bits to make sure they didn't contain any polyester.  As most of the stuff had been stored for a long time I then washed, dried and ironed all of it to freshen it up, and also to pre-shrink it.  I then had to decide how I wanted to store it.  There were some big pieces left over from dressmaking and smaller scraps and it had mostly been cut with scissors and was all in rather odd shapes.  I've read a lot of blogs about sorting and cutting scraps and everybody seems to have their own method, so I designed this method to suit me.

Everything was squared up so that each piece had a right-angle on each of the four corners.  Anything over 6" was treated as yardage. From the rest I cut strips at 3 1/2" and 2 1/2" wide.  They had to be at least 12 1/2" long.  Other long strips that were narrower were put in a separate pile and labelled 'strings'.  I then cut squares at 5", 3 1/2" and 2 1/2". The final sort was anything larger than 1" was saved for 'crumb' blocks, anything smaller was thrown away.  Here is my haul.

This is my 'yardage' drawer. 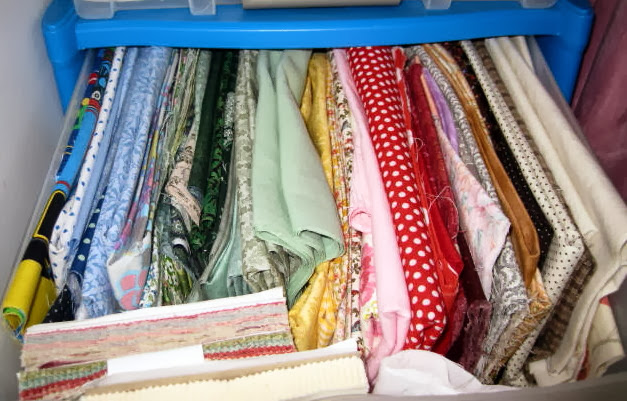 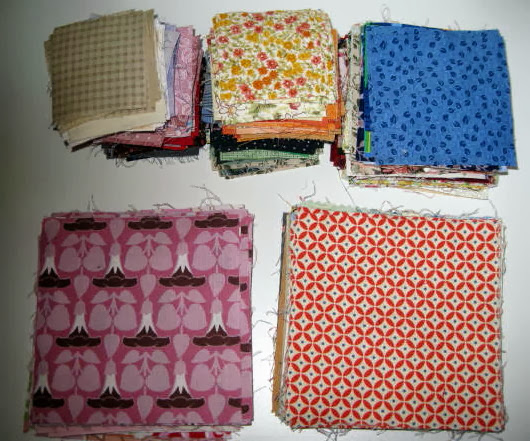 The pink pile on the left is going to become a scrappy Disappearing Nine-Patch quilt for my granddaughter, hopefully for Christmas.

These are the strips and strings.  Not sure what these will become but I'm sure they'll speak to me one day. 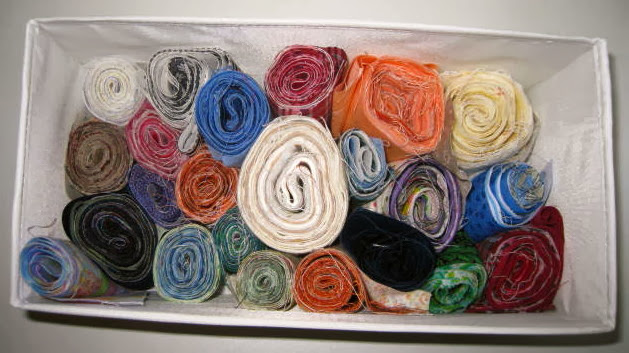 I'm so pleased all the scraps are now sorted and put away in just two drawers.  They take up so much less space now, and I do like to keep things tidy.

As I mentioned at the start, I have done no machine sewing this month, but I have been spending my evenings in front of the TV hand-quilting my Starry Blocks quilt.  I've completed three so far.

It's now October and I've made one Farmer's Wife quilt block today. 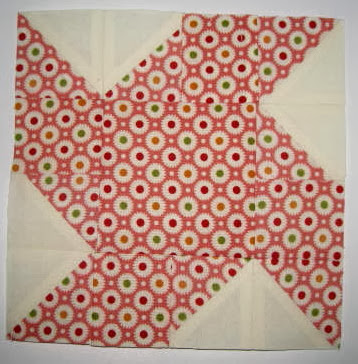 I want to get started on the scrappy quilt for my granddaughter this month so I doubt if I'll get any more FWQ blocks done until I've finished that.