Well, we can't say we were not warned.
The weather men said that it was going to be blustery.
Oh boy were they right. But blustery is the understatement of the year. It is blowing a hoolie. Jolly windy and jolly cold.
When I got the gas bill last week, after I picked myself up from the floor, I swore that I wasn't going to put the heating on until next winter.  I caved.  It's been on since 4pm.
Please, Mr Weatherman, can we have some pleasant weather now.  Sooner rather than later.  I've had enough of winter.  Three days of summer just wasn't enough!
At long last I've finished the baby quilt I was asked to make by a member of my reading group whose  granddaughter is having a baby next month. 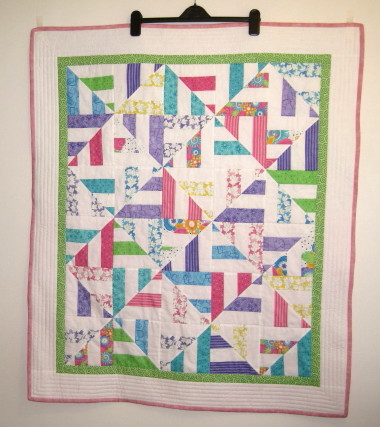 I used a half  of a Moda Scrap Bag which was made up of a line called Happy by Me and My Sister designs for Moda.  The scraps were 32" long strips cut down the lengthwise edge of the fabric.  By the time I had cut the selvedges off I had 2" strips.
I've already made a baby quilt with the other half of this pack here.  I wanted to try a different pattern for this one so I thought a four trip rail fence would look good, but I didn't like it when I laid it out.  Fortunately, I was reading Bonnie Hunter's blog at that moment and saw a quilt that she was teaching at a class.  It started off with a four strip and then was cut on the diagonal to make two large triangles.  I then picked four random triangles and sewed them together to make the block.  It's called Strip Twist and is a free pattern. 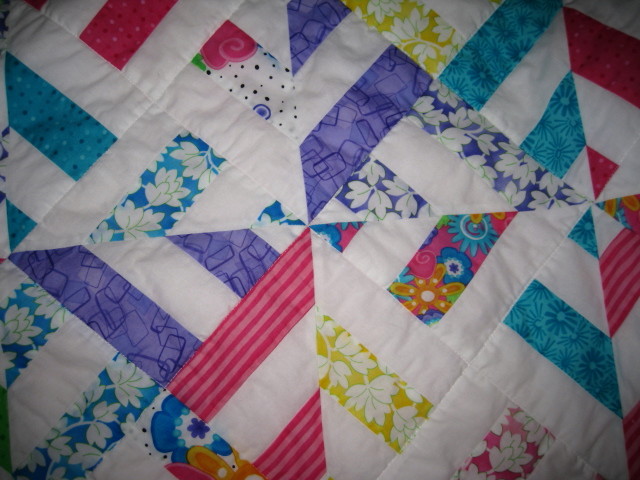 I've backed it with this piece of variegated fabric that I picked up in a charity shop for £1.50, and I used this for the other quilt, too.  Two quilt backs for £1.50!!!!  Amazing. 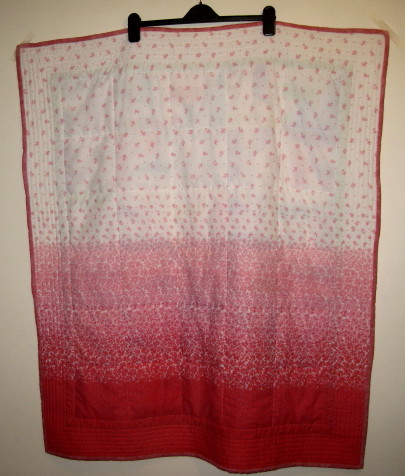 I machine quilted it by stitching in the ditch around each block, and some straight lines on the border. 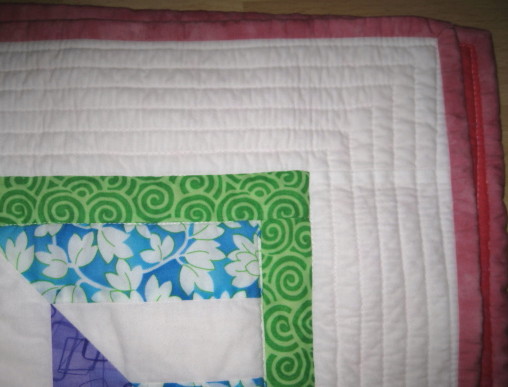 I had a fat quarter of this pink cotton in my small stash and so used that, machining it to the front and hand stitching it to the back. 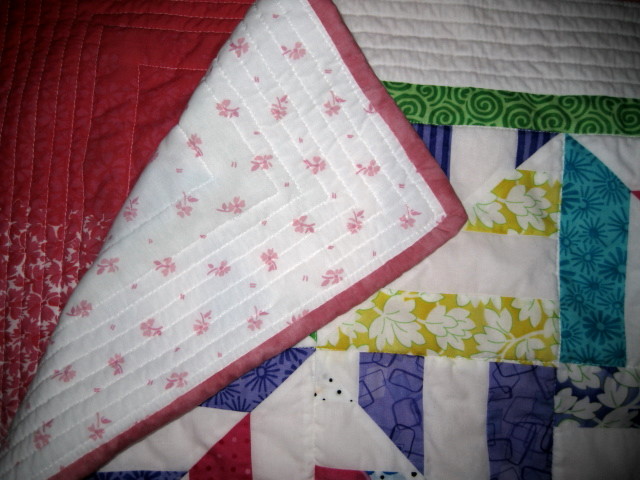 It's funny, but I don't feel anything for this quilt.  I'm pleased with the way it's turned out, but I don't feel any attachment, or enthusiasm for it.  Everything else I've made has been for me, or a member of my family, or for one of my friends, but this is going to used by someone I don't know.  I'm getting paid for it, too, but that doesn't fill me with joy, either.  In fact, I think that the fact that I am being paid to make it has actually put me off it.  I like making things for others, but I like to gift them, and see the look of pleasure on their faces, and know that I've made someone happy.  I don't like this feeling about something I've made.  This could well be my first and only commission.  I'm going back to making things and keeping or gifting them.  I will get much more satisfaction from that.