Beach Huts, May Round-up and an Introduction

After the last mammoth post, another three-parter, but this time a bit shorter, hopefully.

I have a "thing" about beach huts.  I just love them.  They remind me of childhood trips to the seaside, lazy, sunny days and holidays.  I've never actually been in a beach hut, but used to imagine a life whereby the family would de-camp to the beach and set up home for the day in one of the long row of brightly decorated little houses along the sea front.   There are many along the south coast of England, but the prices to buy one are astronomical and I'd never be able to justify the expense.  I can still dream, though.

So you can see that when "The Patchsmith" revealed her pattern for this darling, little mug rug, I just had to have it.  We had a day of sunshine last week (was that our summer?) and the sun made me think of the seaside and so I dropped everything and made this (as I couldn't actually go to the seaside - reason in Part 3). 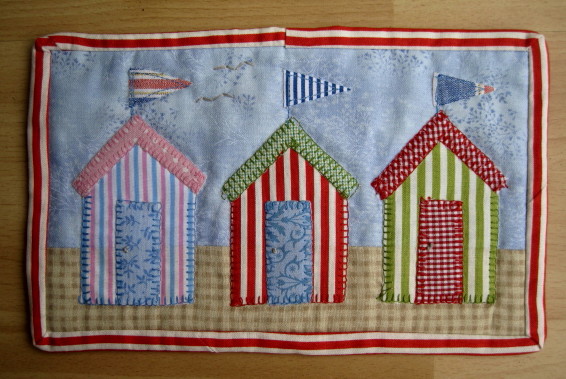 A complete mess-up!  All my fault, not the pattern's.  It's only a small project, just 9" x 4 1/2 ", but I had quite  few problems with it.  I thought , because it was small, that it wouldn't take me long to make, but I was so, so wrong. This is applique and I've only ever done it once before, a little star on the front of a t-shirt for my grandaughter.  I had some Bondaweb tucked away, but the paper backing was separated from the fusible bit and so was very fiddly to trace and cut out the shapes.  I also didn't know which side to iron down first as it wasn't stuck to the paper, so had to keep cleaning the mess off of the soleplate of my iron.  I also put the bonding on the right side of that green stripy hut three times!

When it came to sewing it around the edges I decided to use the blanket stitch on my machine.  I did practice on a scrap first to see where I needed the edge to be, but failed to practice going round corners.  I haven't quite mastered where to stop sewing, and at which part of the stitch, before I turn to get a neat corner.

I used a piece of cotton batting and backed it with a piece of blue cotton before hand quilting  around the huts, doors, roofs and flags.

And then we come to the binding.  What a disaster!  I wanted a red, stripy binding and I had a 10" square of red stripes from a "Marmalade" layer cake I am saving for my "Farmer's Wife" quilt that I am going to make. Unfortunately, in my haste, I cut the strips the wrong way, so instead of neat little vertical stripes I have horizontal stripes.  I didn't have enough fabric left to cut more binding so had to go with it.  I had a job to match the stripes when I joined the pieces, and also managed to get a join right close to a corner when I sewed it on. I hadn't left myself enough room to do a diagonal join for the finishing join and the straight join at the top of the quilt is horrible.

One good thing has come out of this though.  I shall actually use it!  If it was perfect I would be very hesitant about putting a cup of tea on it as I wouldn't want to get tea stains on it and ruin it, but because it is a   "second" I don't mind.  I will make another one "for best" now I know all the pitfalls, and will definitely not rush it next time.

Not a lot of sewing has been going on during the month of May, the main reason for which will become clear in Part 3.  I've been spending time trying to sort out my sewing stuff as it seems to be taking over my downstairs living space.  I live on my own now and so don't always tidy away at the end of the day.  I'm also not very good at clearing away one project's mess before starting on a new one.  The accumulation of scraps  and bits and pieces make for a very disorganised workspace, and I've been trying to bring some semblance of order to it all.  I've decided to move my sewing upstairs to one of the bedrooms, which in itself has provided lots of problems, as I have lots of stuff to sort out there as well.  It's a job to know where to start. 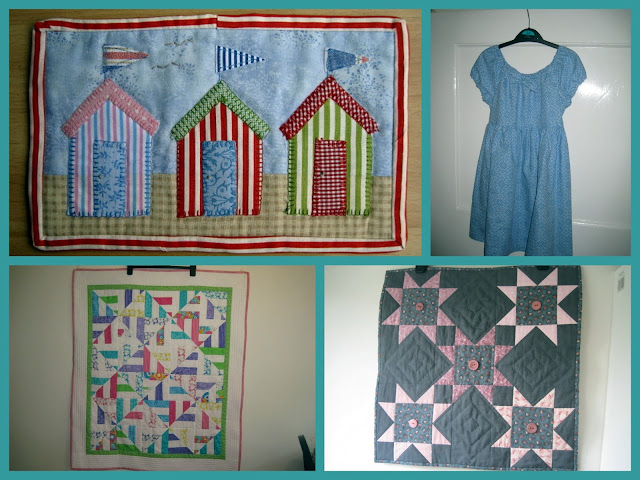 Finally, here is the main reason for my lack of productiveness. 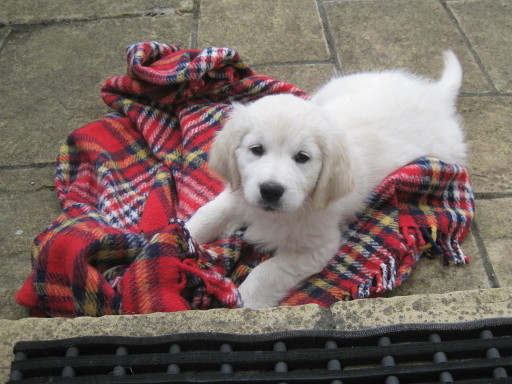 Molly belongs to my daughter who lives five minutes away from me.  She has been wanting a Golden Retriever for a long time (she used to have one, but when she split from her partner she lost custody of the dog).  This puppy became available at the last minute as the prospective owners couldn't take her and so Catherine jumped at the chance and we went to get her that day (2 weeks ago).  The problem being is that my daughter is a full-time teacher, and puppies need looking after all day, so this is where I come in.

I go and fetch Molly first thing in the morning and bring her down to my house.  She plays in the garden and sleeps on her bed in the dining room.  I keep the patio doors open, and so far, there have been no puddles indoors.  Only problem is that it has been so cold for me, and I sit hunched over the computer with a blanket wrapped round me.  I have managed to slip out of the house when Molly has a nap, but I only like to leave her for an hour at the moment.  At first, I didn't like to make a sound when she fell asleep in case I disturbed her, but I'm getting more used to her now.  She races around my garden like a demon possessed, and then just flops and is asleep in an instance.  She is really very mischievous. See that blanket she is sitting on.  Well,  it was in the house, but Molly decided it needed to be outside. 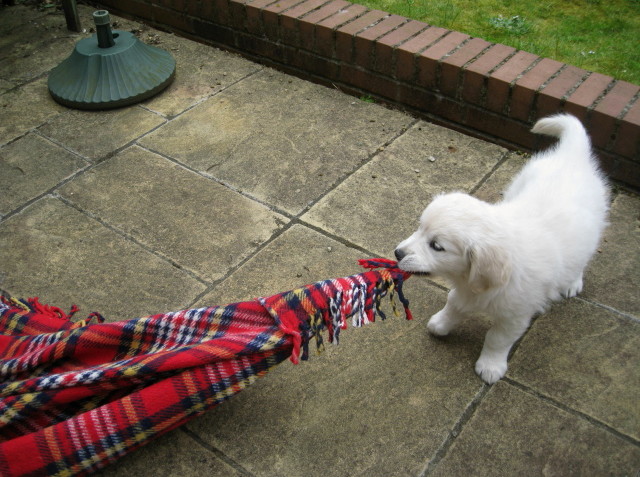 It was quite heavy for such a small pup, but she was determined.

Catherine comes by after work, eats her dinner with me and then goes home with Molly.  She has the "night  watch" which I'm really glad about. Molly's just had her second lot of injections so can go out in 2 weeks time.  We're both going to take her to Puppy School so that we both learn how to train her, and are consistent with our commands.  She's already coming when her name is called, and she sits on command. 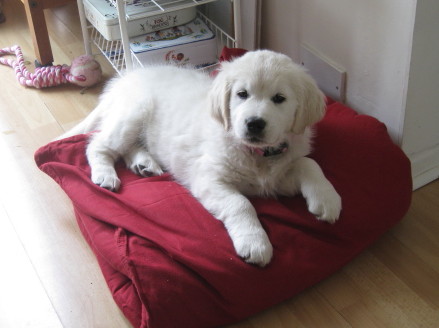 Next  month I want to get the final blocks done for my star sampler quilt so I can get it put together ready for hand quilting over the summer.  I also want to start on my Farmer's Wife" quilt, but I've been saying that all year.  I wonder if this little Miss will let me?