My Scrappy Trip Around the World is no longer a Work-in-Progress. It is Finished.  Completed. Photographed.  Ready to be wrapped up and gifted.  Re-named.   And ahead of schedule.  My daughter's birthday isn't until the end of next week. 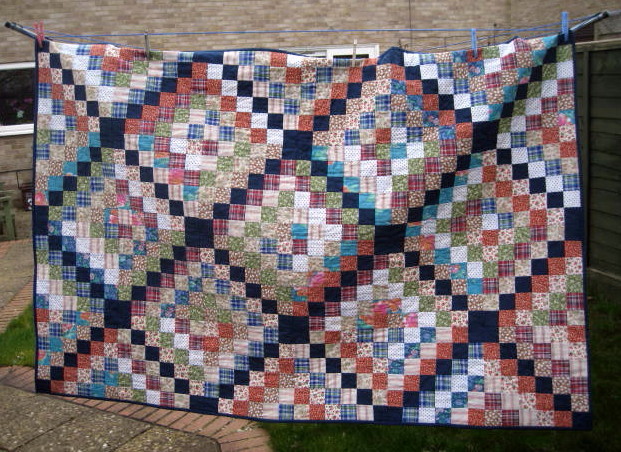 The story of this trip started way back in the eighties, I suppose.  Having two teenage daughters and a limited budget meant that I made most of their clothes.  They were quite happy to wear home-made as I was able to adapt patterns for latest styles and fashion trends, and they always had something that nobody else would be wearing.  I sourced fabric in the sales, especially at Laura Ashley as they always had really cheap offers, and their fabric was extra wide, too.  When my husband was posted overseas for short tours with the Army he would go to the local markets and send me back lengths of fabric, too.

Fast forward to last Christmas when I was in the attic putting away the decorations.  I stumbled across a bag full of my eldest daughter's old clothes.  She lived with me for a year recently when she was between house sales and stored  some stuff in my attic.  I thought she had taken everything with her to her new home, but this bag was still up there.  I had a nosey and saw that the clothes were all cotton, mostly the ones I had made for her, and way too small for her now, so I brought them downstairs and asked her if I could cut them up for patchwork.  After inspecting them and having a few reminiscences about wearing them at university she agreed.  I took my scissors to a pile of skirts, trousers, shirts, tops and shorts and cut them up into usable pieces. 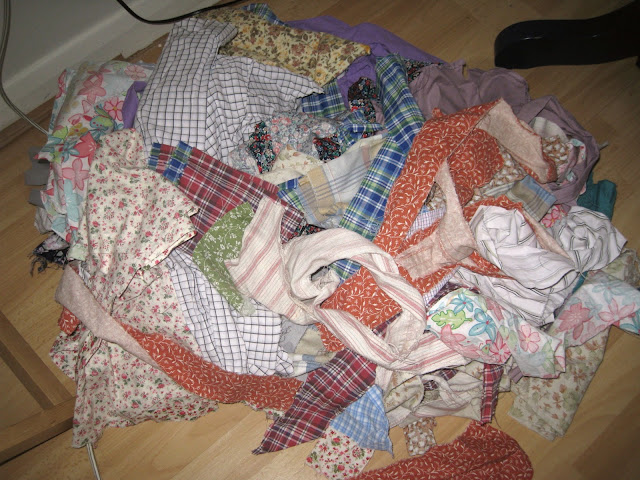 I then used my rotary cutter and managed to get just enough usable strips of the right length to make a large size lap quilt. 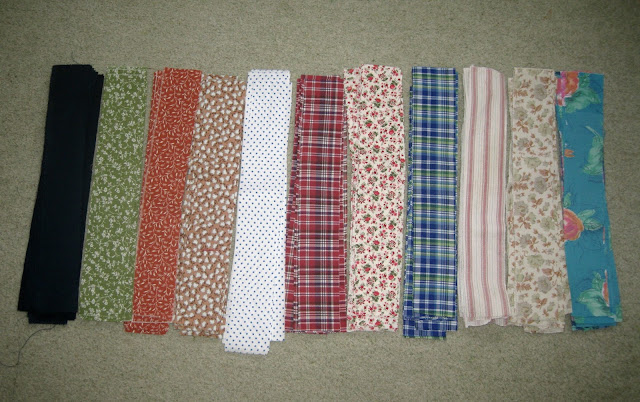 The dark navy didn't come from an old garment but from an old sheet, but I thought I needed something in each block that would tie the whole lot together.  Looking at other quilts on the internet I found that I was drawn to the ones that showed the pattern a bit more distinctly so used the navy across the mid diagonal as a constant in each block to show the structure more. 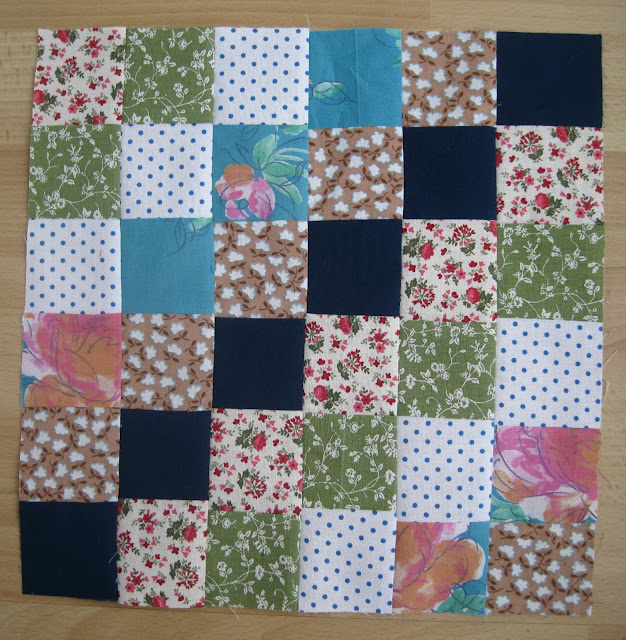 I wanted it to be a surprise for my daughter's birthday, and it has been difficult keeping this away from her eyes.  She comes to me most days for her dinner after work, so I've had to be so careful about putting it away before she comes in, even to the extent of emptying my scrap and thread bins into bags and putting them in the dustbin so that she wouldn't recognise anything.  I've been putting other bits and pieces out by the sewing machine so that she didn't think I was slacking on the quilting front. 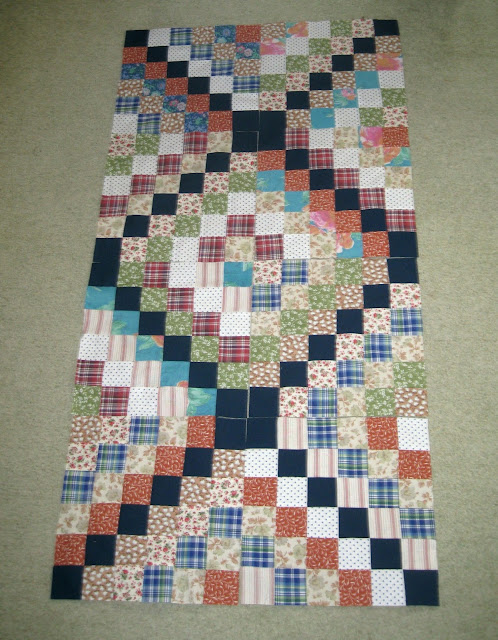 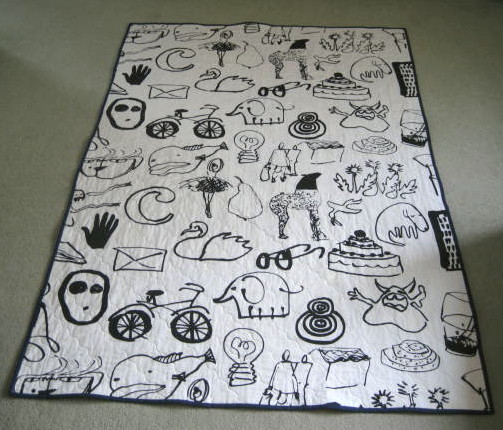 I quilted it in diagonal wavy lines across every other block and bound it in the plain navy. 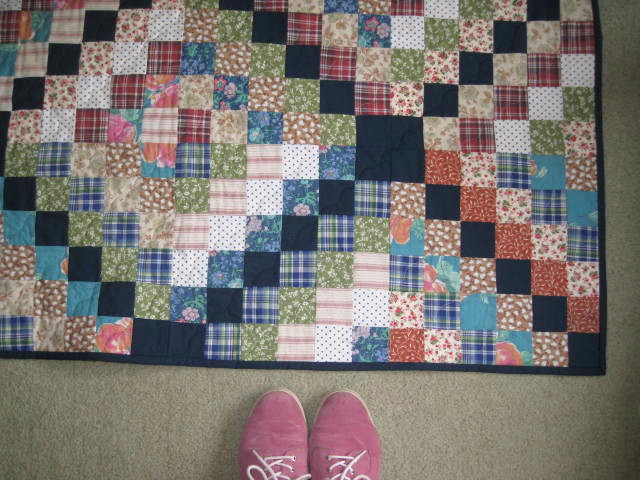 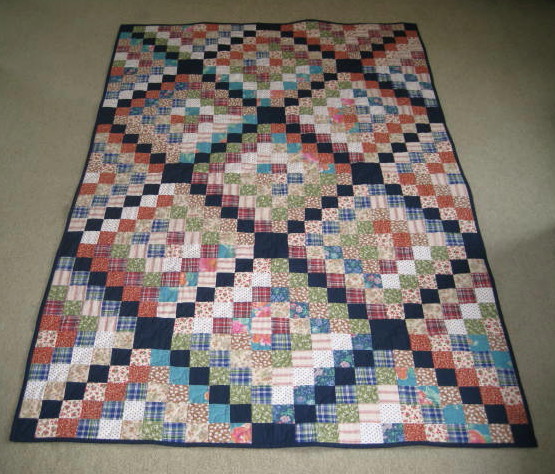 I've given it a new name:  "Happy Days".  We used to love watching the programme on TV way back when the girls were younger, and I think the name goes with the thoughts of the fabrics used. 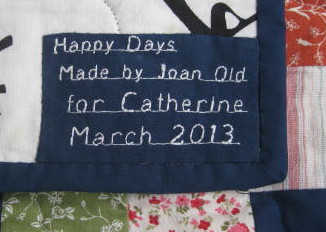 I hope my daughter likes it.
Posted by joanold at 18:37