I have been so busy with non-sewing stuff this week, but if you just want to see what I did achieve in the sewing line skip through this lot to the end of the post.  I won't be offended :)

On Saturday I had a trip to London with my eldest daughter to see Judy Dench in a new play, Peter and Alice.  We bought the tickets about nine months ago and so it's been a long time waiting, but well worth the wait.  Judy does not disappoint.  I love walking around London looking at the fabulous buildings, so instead of using the Tube we walked from Waterloo over Hungerford Bridge, past Charing Cross and up to Covent Garden for a quick browse and some lunch.  Then on to the theatre near Leicester Square.  After the play we walked down to Trafalgar Square and went in the National Gallery because we love to look at Van Gogh's Sunflowers and his Chair, took in a few Monet's and Renoir's and marvelled at one of my favourites, Turner's The Fighting Temeraire.  Back to Waterloo via the South Bank food market, where we had oysters and bought some gorgeous Polish pastries to eat on the train going home.  A great day.

On Tuesday I went to Portsmouth for the day to the Spring Meeting of Hampshire Women's Institute.  The key speaker in the afternoon was Clarissa Dickson-Wright, a celebrity cook and TV personality.  Another enjoyable day.

I've been trying to make life easier for Dad now he is getting old.  He is extremely hard of hearing now, even with his deaf aids, so I arranged for the Sensory and Occupational Assessors to come and see what help he needs.  I was amazed at what is available.  I spent most of today installing two new amplified telephones, one in the living room and one in his bedroom, with an extra loud extension bell in the kitchen.  He also needs two new extra loud smoke alarms, with a vibrating alarm to go under his pillow for when he's in bed and not wearing his hearing aids.. He's also going to get a portable Loop system for the TV so he doesn't have to have it turned up so loud and annoy the neighbours.  I've also been seeing about getting the bathroom made into a Wet Room as he finds getting in and out of the bath a bit of a job.  His stair lift needs replacing as the present one doesn't meet the newer regulations.  He's getting a motorised scooter to help him get around easier, so he needs a ramp to get over the step into the house, and a hoist to get it in the back of the car.  He's also going to have a Rollator for places he can't use the scooter.  All of this has required surveys, measuring, estimates, phone calls, form-filling, ordering, trips to various retailers to try out things, and waiting for people who say they are coming, and then don't.  The Wet room is going to take about 10 days to install so I shall have to keep Dad busy and out of the way whilst that takes place.

I was really getting serious sewing withdrawal symptoms after all these goings-on.  I just had to do some sewing, so when I saw this square on  Heartspun Quilts this evening I quickly drafted it out on squared paper, cut it out and pieced it.  About an hour and a half from start to finish.  Pam doesn't say what this square is called so I've named it Starbright. 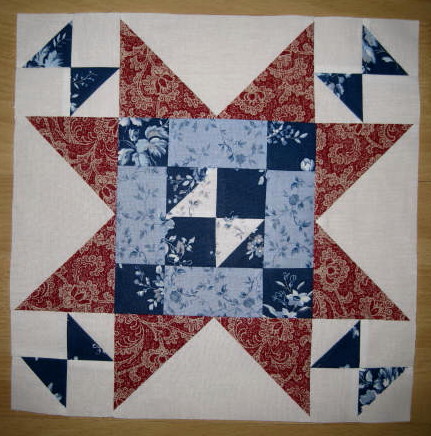 Ooops, that looks a bit blurry to me.  Might try to take a better picture tomorrow in daylight.

This will fit in so nicely with all of the other starry blocks.  Fabric is from the Shabby Chic's Chambray Rose collection, Clermont Farm by Moda, and Kona Snow.
Posted by joanold at 23:04