Six of the Best

It feels like only last week that I uploaded the last batch of squares, but I've got six to load today.

The designer designed this block with a sleeping cat and called it Cat Nap but you're most likely to find a dog sleeping on mine.  My daughter's dog, Molly, is a frequent visitor and spends a couple of nights most weeks with me.  She loves spreading out on my bed for her afternoon nap, so I found an image on the internet, resized it, and sewed it into my block.  This block went together very easily, with choosing and sewing the dog taking up most of the time. 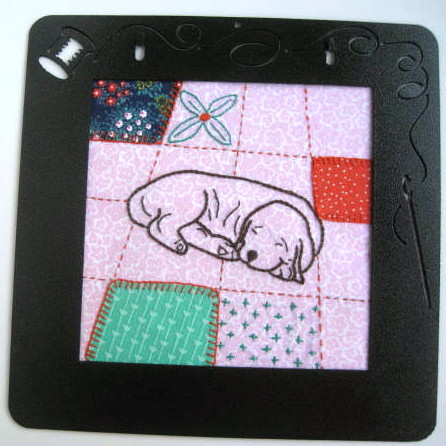 I've changed this block up a little from the original as I found the fabric placement  too busy and the shapes were lost.  By using plain colours instead of floral and only one strong pattern, the spots, I've defined the shapes a lot more.  This block was foundation pieced and so was fairly quick to put together and made matching up seams very precise.  However, I've changed out the original square in the centre for a circle so it's neater and less bulky. 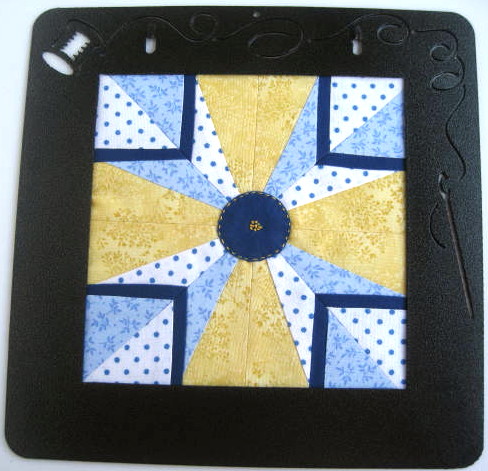 This was a pleasant block to put together.  Once I'd made the circles using my Perfect Circles by Karen Kay Buckley the applique didn't take too much time.  Instead of my usual machine blanket stitch I hand stitched the fruit using invisble thread.  I felt that the edges of the bowl needed a bit more definition to them as it seemed to merge into the background so I did lines of backstitch around it in a deeper colour.  I added the ric-rac braid to take away the hard lines on the top of the bowl. 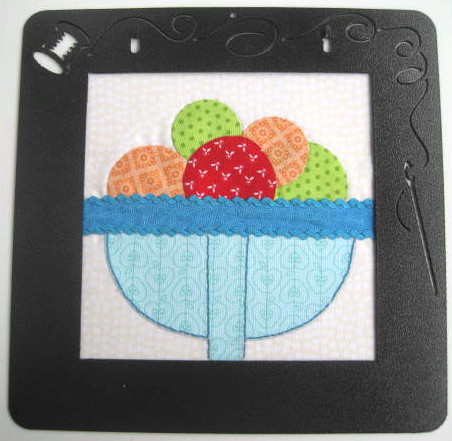 It was purely a coincidence that this block came out the week that I visited Winchester Cathedral's most fantastic Flower Festival. using the inspiration of the 12th century Winchester Bible.  Jenny designed this block using five different patterned farbrics, which is at least three too many for me, so I simplified it by using only one.  Through my window you can see an embroidered display of flowers, using the colours that were the theme of  a lot of the displays in Winchester.  This simplified folded and machined method of construction makes for a much more bulky middle than the traditional hand pieced block. 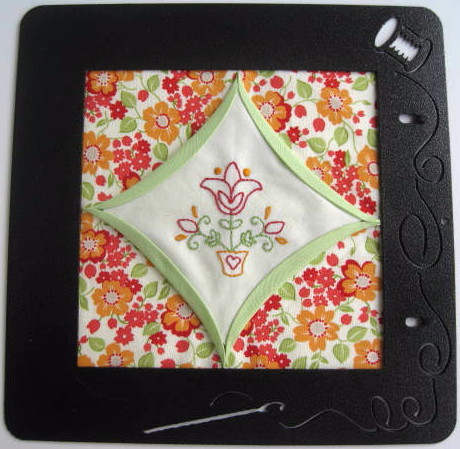 I have done this block almost as the designer intended.  I did change out the four-block construction for just one whole square and I've used less colours, keeping to a pink pallette for cohesion.  Just to make it my own I've added a few touches of hand embroidery. 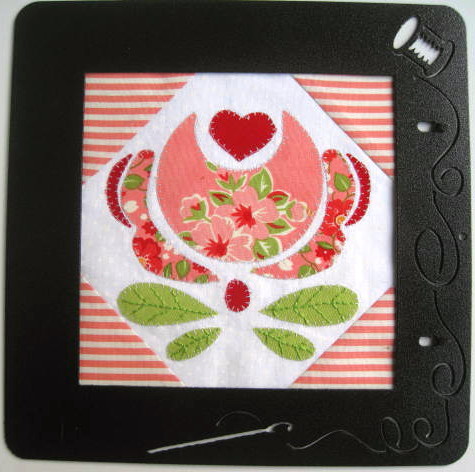 A neat little pieced block with simple shapes made for a quick block to construct. The original had just a plain centre so, of course, I had to add soemthing in there.  I like to sit and drink tea when I'm listening to a radio play in the afternoon so a little cup of lemon tea managed to find it's way onto my block. 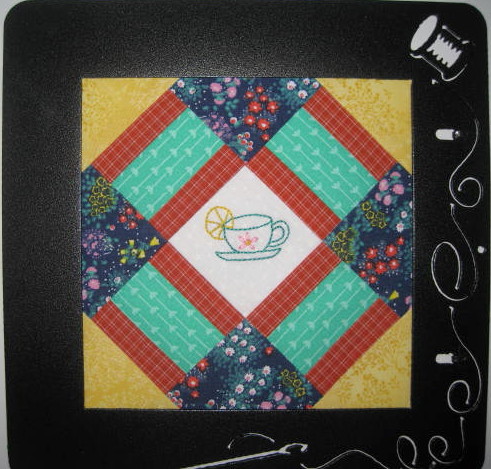