I've decided to resurrect this blog.  I can't believe it's been two years since I was last here.  I have been busy, not idle, but not much patchwork.  I'll write more about what I've been doing in future posts.

I'm starting the new Splendid Sampler Quilt Along hosted by Jane Davidson and Pat Sloan.  It's going to take 52 weeks and there'll be two 6" blocks a week. There will be a host of different designers each contributing a block.  I'm probably not going to do them all but will pick and choose.  I won't make a large quilt but maybe a hanging or a runner for my newly decorated sitting room.  I have been collecting fabrics from the French General collections by Moda, choosing the red ones and mixing it with neutrals so this will be the pallette for my blocks. 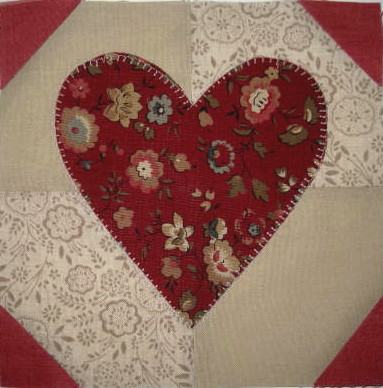 The first block  came out on St Valentine's Day and is called Hearts Aflutter, designed by Pat Sloan.  I think it took me longer to choose my fabric combination than it did to actually make it, but I'm very pleased with the outcome.  I chose to attach the heart using fusible web  and machine applique.  I love using the blanket stitch on my machine for this.
Posted by joanold at 22:34