Last August  I made some bunting for my granddaughter's fifth birthday party.  She had a fairy princess themed party in the garden.  A pop-up gazebo was her castle, so the bunting decorated it beautifully.  Unfortunately, I don't have a photo of it, but it was made from all my pink and green fabric scraps I had leftover from dressmaking.  When my daughter saw the bunting she thought it was perfect, but said that her old wooden garden table could do with a tablecloth to match. And so my venture into patchwork began.

I didn't have much fabric left, but did have a few odd pieces of green and pink.  I found out an old white cotton sheet, looked on the internet for guidance and this is what I came up with. 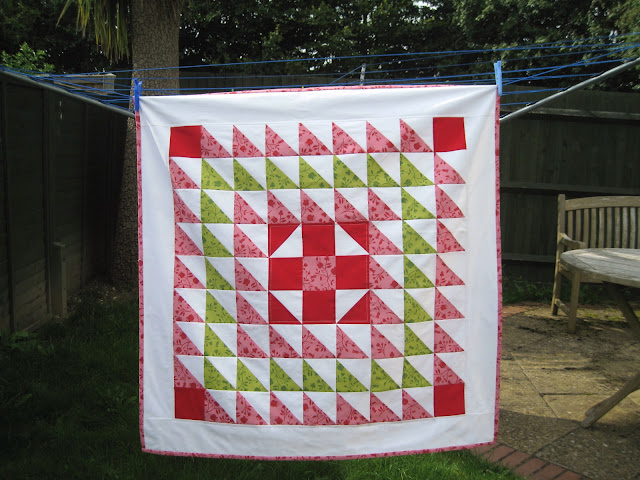 I went with half-square triangles so I could get more square blocks, and found a scrap of red to fill it out a bit more, adding a wide white border to make it a bit bigger. Each block is a finished 4" square.The back is just plain white and I bound it in single strips of the pink pattern stuff as I didn't have enough fabric to make it double. The quilting is just stitch in the ditch around each large square of the pattern, with echo stitching around the centre block.  There is no batting and it measures about 44" square.

I had it ready for my daughter's birthday two weeks later and she was delighted with it.  I enjoyed making it so much, my head became filled with so many projects I wanted to try and my time was taken up with scouring the internet and blog land for inspiration.  My new hobby had begun!